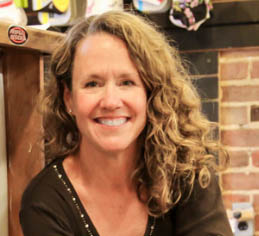 After growing up in Plattsburgh, Kim has lived and worked in many places including France, Egypt, California (twice!) and Montreal.

With a degree in Finance, Kim thought she was headed to Wall Street, but the Jesuit influence of her alma mater nudged her towards something a bit more philanthropic. She served as a volunteer for one year for the Jesuit Volunteer Corps and later worked for six years with Peace Corps Headquarters in Washington DC.

Wanderlust steered Kim to travel around the world for several months on a bare bones budget, resulting in many interesting stories to share.

With a M.A. in Human Resources in hand, Kim worked in various corporate human resources positions before leaving corporate life to raise her family in Egypt. After a few more moves, Kim and her husband Dennis, also a Plattsburgh native, were thrilled to return to the North Country to settle down.

Since her return to the region, Kim has pursued her passion for small business and small business development. She owned and operated Maui North Ski, Bike & Board Co. and worked with the Small Business Development Center. Working with small business owners so they can not only survive but thrive is at the heart of Kim’s work passion.

Kim is active outside of work. With her family by her side, Kim enjoys skiing, biking, sailing and general adventuring.